At the start of its 70th anniversary year, Jola is supporting a special kind of concert. On 28 January 2022, the Kammerchor Stuttgart (Stuttgart Chamber Choir) will be presenting an “A Cappella” program in the Protestant Church in Lambrecht.

The internationally renowned vocal ensemble returns once again to Lambrecht for a concert. The last time the choir thrilled the audience was in 2012 on the occasion of the 30th anniversary of the “Chorgemeinschaft Lambrecht” (Lambrecht Choir Community).

This time a pure “a cappella” program is presented, that is polyphonic vocal music without instrumental accompaniment. There will be compositions by Johann Sebastian Bach (1685-1750), Carl Friedrich Christian Fasch (1736-1800), Gustav Mahler (1860-1911) and Richard Strauss (1864-1949). More information about the concert is available here:

The ensemble accepts the invitation of Pastor Martin Groß, who studied church music himself until a few years ago and was once a member of the ensemble himself. When managing director Lars Mattil was looking for information about the managing directors of the Gebrüder Haas (Haas Brothers) cloth factory (Jola’s predecessor company) in preparation for last year’s special exhibition “100 Years Administrative Building”, the two got to know each other.

“Music has the power,” says Mattil, “to address people‘s feelings directly, but also to provoke thought. Professionally performed vocal music can create very special moments of calm, but also of self-reflection. This is especially important now during the current coronavirus pandemic.”

The Kammerchor Stuttgart is conducted by Frieder Bernius, who not only founded the ensemble in 1968 and but also created the Klassische Philharmonie Stuttgart, the Stuttgart Classical Philharmonic, in 1991. His musical work has allowed him to go on concert tours that led him to important international festivals and enabled great radio productions in the recording studio as well as provided the opportunity to teach at various music colleges. Bernius received numerous awards, including the Bundesverdienstkreuz am Bande, the Federal Cross of Merit on ribbon. And the best for last: he has family ties to Lambrecht. So there is hope that he will return again with the Kammerchor Stuttgart.

Managing director Lars Mattil, who was also heavily musically active before joining Jola, would like to see more projects of this kind in the future: “There are always points of contact between business and culture. Companies like us can support creative artists, but possibly also present one or the other event themselves. In the spacious premises of the former cloth factory, we have the opportunity to host concerts, exhibitions and the like for a limited number of people. If we can manage it alongside Jola’s day-to-day business, we would like to become a little more active again in the years to come.”

For the year 2022, Jola is planning the next concert by a German-Turkish duo, which will provide the music for Jola’s image film. 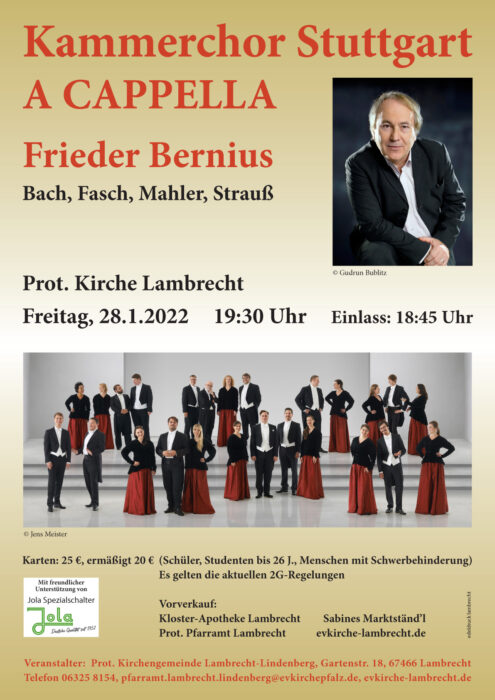 On Saturday 16 July 2022, Jola Spezialschalter celebrated the company’s 70th anniversary on the company...